For inquiries or membership information,
Please email the MML Secretary :

The sport of black powder shooting is as educational as it is fun. Not only are you engaging in friendly competition with fellow sportsmen, you’re also learning a skill that was vital to our predecessor’s survival on this new continent. For the frontiersman, his ability to place a bullet on target with only a single shot often meant the difference between meat on the table and a sparse meal of nuts and berries. For both the Revolutionary and Civil War militiamen, success depended on their units’ ability to produce and sustain a high volume of accurate musket fire. And for pioneer and cavalryman of the black powder cartridge era, making every shot count was vital when access to supplies was days or even weeks away. You’ll find that black powder shooters are a friendly bunch, eager to share their expertise and knowledge with anyone interested in how it was done “way back when” and to improve their shooting skills through friendly competition. The following links contain some basic information for those new to the sport of black powder shooting. I highly encourage anyone interested in trying out the sport to contact MML or the nearest shooting club for opportunities. We’d be greatly pleased to host you at one of our shoots. 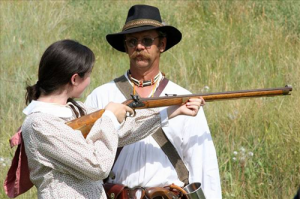 Flintlocks: How to Shoot Them

This is a well written introductory article by Paul Vallandigham, the title of which pretty much says it all – Flinlocks: How to Shoot Them. I think you’ll find it an easy but interesting read and should pique your interst in the sport, well worth putting up with the advertisements on the website. He dispells many of the myths regarding flintlocks which, I have found, are just as accurate as percussion rifles in a skilled markman’s hands.

The majority of this article is about how to improve your off-hand marksmanship to the point where you’re good enough to accomplish trick shooting such as cutting a playing card in half. Off-Hand and Trick Shooting is a good read and, in the end, contains many good ideas of improving your shooting skills. For example, using empty .22 rifle casings for targets at progressively longer ranges – who’da thunk it?

Hosted by Tidewater Muzzle Loaders, Inc at the Associated Gun Clubs of Baltimore Range, Marriottsville, MD normally during the first weekend in May.
Click here for details

The North-South Skirmish Association (N-SSA) was formed in 1950 to commemorate the heroism of the men, of both sides, who fought in the American Civil War, 1861-1865. The N-SSA promotes the shooting of Civil War firearms and artillery and encourages the preservation and display of Civil War materials. The N-SSA works to accomplish these goals by conducting skirmishes; competitive, live firing of these Civil War firearms and artillery.

Ft. Shenandoah is the N-SSA’s home range. It is located on several hundred acres of land in the rolling hills of the lower Shenandoah Valley, just outside of Winchester, Virginia. Facilities include the country’s widest (over a quarter mile) rifle range controlled from a single tower, a separate revolver range, and private camping.